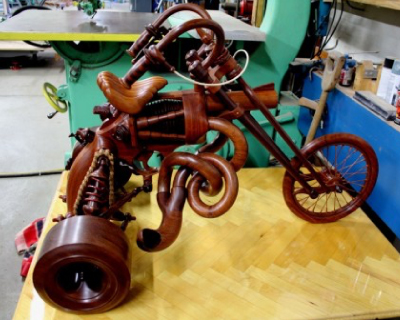 After meeting with Zac Higgins in Reno I drove to Sacramento to meet with Ray Mowder of TabLeft Workshop. Ray has some very clever videos and I have really enjoy his YouTube channel. From there Michael Cooper, David J. Marks and Peter Brown  have all been an amazing part of this trip! 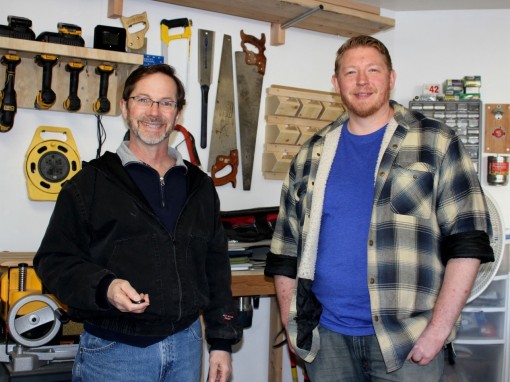 Michael Cooper with his latest sculpture in progress. 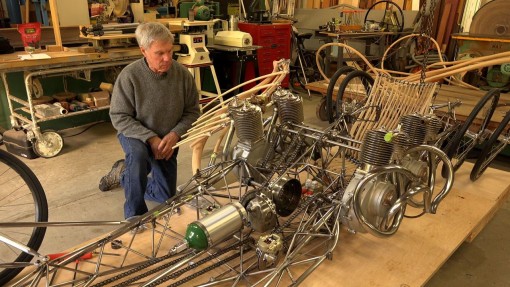 I really enjoyed meeting Michael. I saw a presentation that he did at the Furniture Society Symposium a few years ago and I have always been a big fan of his work. My time with him far exceeded any expectations I had ahead of time. He and his wife Gayle are two of the very nicest people that I have ever met. Spending time at their beautiful home was icing on the cake. In addition to many of Michael’s beautiful sculptures, their home is tastefully decorated with artwork and custom furniture by some of the great furniture making icons of our time.

Michael still has several of his sculptures on his property and it was great to see them up close. Michael was very generous with his time and we made several videos while I was there. In one of the videos he showed me his most recent sculpture which is still in progress. (See photo above) He also did a video describing his technique for making wooden coil springs and another one on his technique for making the convoluted compound curves that is a signature of his work. 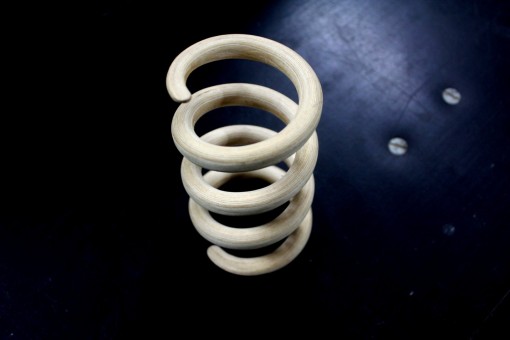 Michael showed me how he makes the compound curves as seen in the exhaust pipes of this sculpture. 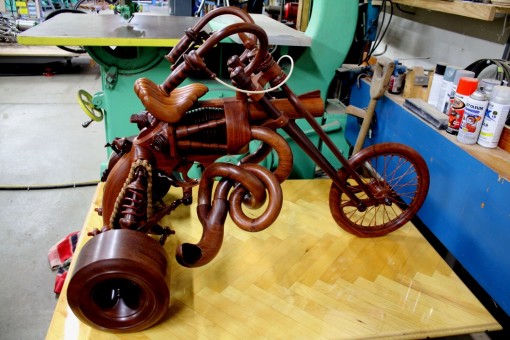 It so happens that David J. Marks lives very close to Michael. I saw a seminar that David did for the Minnesota Woodworkers’ Guild and, well, he is David Marks! I was quite pleasantly surprised not only that David agreed to meet with me, but by how generous he was with his time. We spent the whole day together and we made two videos. The first one is about the fabulous 30” vase that he is currently working on. His wife Victoria joined us for the second video which was a complete tour of the David J Marks Woodworking School. David and the school are both great and I would encourage anyone who is considering taking a class to take a look at his school.

Not only was David generous with his time, but he also gave me a nice piece of exotic hardwood called Pernambuco as a gift! Obviously, David is very high on my list! 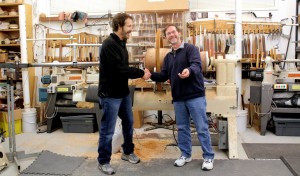 The trifecta of this portion of my trip was the opportunity to meet Peter Brown. Peter has a very good and extremely popular YouTube channel.   Peter is a very fun guy and really enjoyed myself that afternoon. Even though Peter has made a name for himself with his “crazy creations”, he is not a crazy guy. To the contrary, I found him to have the admirable qualities of being sincere, personable, and fun too!