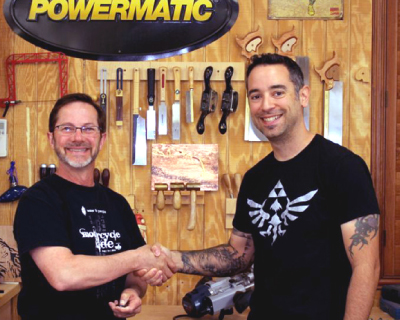 One of the absolute high points of my 2016 winter road trip was meeting Marc Spagnuolo, aka The Wood Whisperer at his shop outside Phoenix, AZ.

I posted on Facebook when I was in Arizona that I would like to interview another woodworker while I was there.  I had heard that Marc lived in the Phoenix area, but I never expected that he would have the time to meet with me.  To my surprise he responded to my Facebook posting and invited me to his woodshop for an interview!

I was meeting most of the woodworkers that I interviewed for the very first time when I met with them.  Rather than just show up and start interviewing, I usually arranged to meet them at a restaurant for lunch to get a chance to get to know them first.

When Marc arrived at the restaurant I was pleasantly surprised to see that his wife, Nicole, was there too! They were both very nice, down to earth people and I felt very comfortable around them. 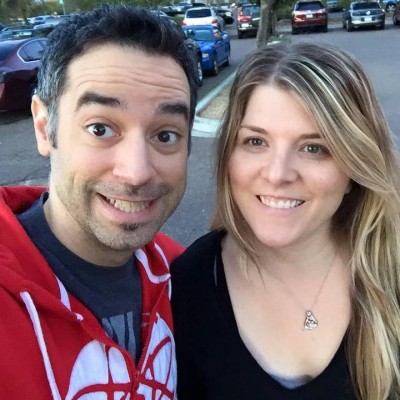 After lunch we headed to the Dream Shop that he built behind his house, and yes it really is a Dream Shop!  There is even extra space around the machines, I don’t see that very often!  Dream Shop Build Video

We broke the interview into three parts:

I wanted to hear about Marc’s background and how he got started with all this.  I am also a big fan of David Marks and I wanted to hear more about how they got to be such good friends.  The most surprising thing I learned is that Marc is a molecular biologist!  I didn’t see that coming, but it is amazing how many woodworkers have scientific backgrounds.

I was most interested to hear about the business side of The Wood Whisper web site and the Wood Whisperer Guild.  I wanted to ask Marc why he thought that the Wood Whisperer web site and Guild are so successful and what does he do differently than most of the other woodworkers on the internet?  Marc was very open about his business.  His advise to others who want to develop internet woodworking businesses is “Don’t do it”.  The main reason he says that is because there is so much more competition on the internet today than there was when he started out.

We could’t get to all of the viewer questions.  Most of them were serious woodworking questions, but some were just for fun like Peter Brown’s question about why doesn’t Marc like Batman as well as Superman!

The last thing I did before we wrapped it up was to give Marc one of my Jack Bench Woodworking stickers and he graciously pasted it on the wall. 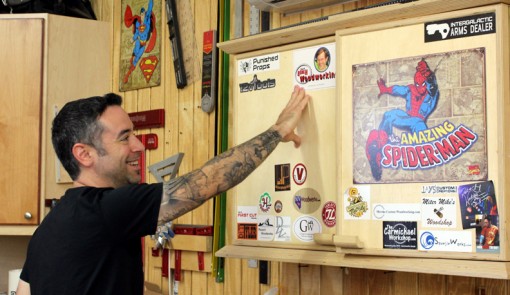 This blog article is just a recap of the interview, so be sure to watch the Video!

Marc is a fun guy to hang out with and I really enjoyed meeting him.  If you have ever watched any of his videos or listened to his podcast then you have a good idea as to what I mean by that! 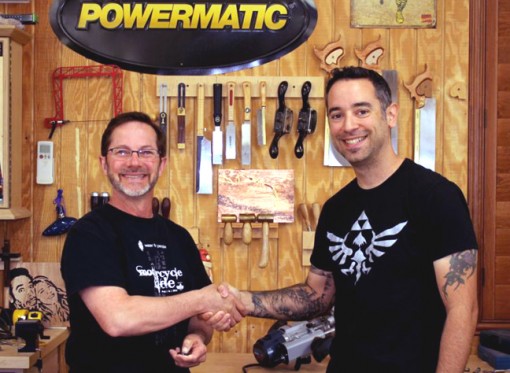 Marc and me in his Dream Shop! 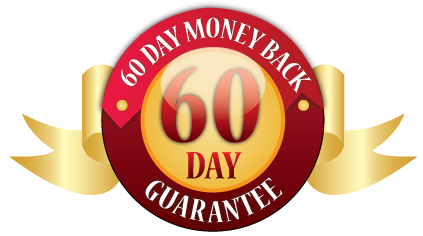 Made it to Reno!